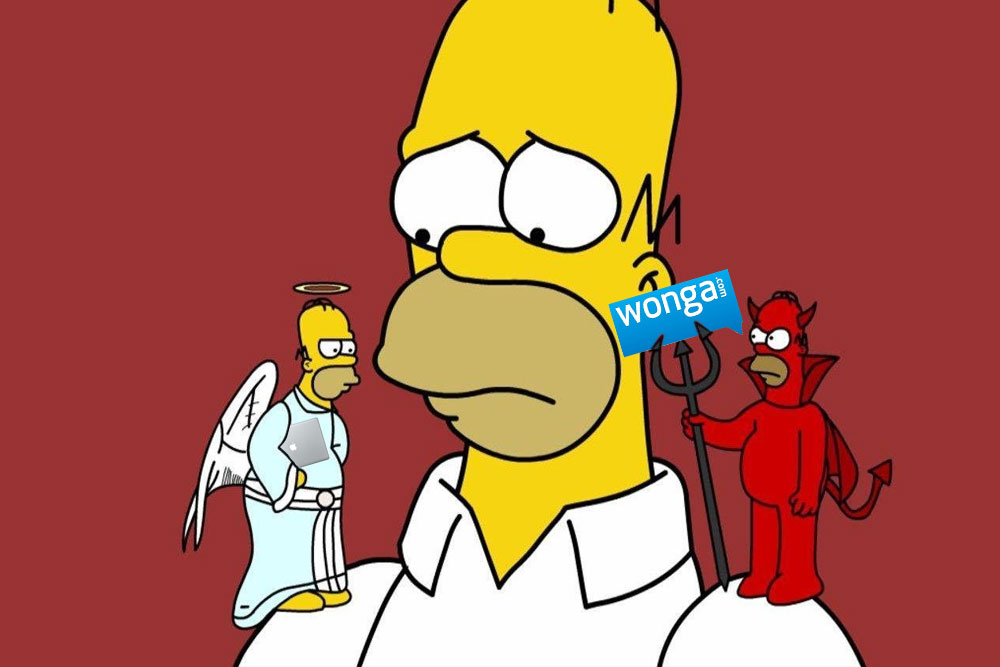 We have all been there, quite probably, even the non-designers out there that may be reading this. Working for a company or a client that you might think are, ethically, not completely sound.

This may not mean that the company is corrupt, but that the person that we are dealing with is, quite frankly, a nasty sales-driven “forget the peasants it’s all about me” bit of a prick. This could manifest itself in sexist/racist/homophobic jokes that you are uncomfortable with, or just the way that they shout at and belittle people that work for them.

As I said, I don’t think that there is anyone who hasn’t worked for someone like that. Generally we just put our head down, do our work, and moan about them in the pub with our colleagues whist knowing that we will be back there, day after day, week after week, year after bloody year because we need the money. The thought that all we are doing is making more money for them to be utterly odious and obnoxious with doesn’t really seem to jolt us into taking the harder decision to move on to somewhere better, to the promised land of nice bosses and pleasant workplaces… possibly because, in our minds, we are sceptical that such a place exists.

That seems to be the general experience for lots of us holding down full time positions in a company, knowing that we still get paid and that’s all that matters. And hey, you might actually enjoy the work, or at least some decent banter with like-minded people while there.

What about, though, if you are taking on clients of your own and you are evaluating what jobs you should take and what you shouldn’t.

See this is interesting for me as my company Souzou has only been up and running this year, and is still a fledging design agency finding its way in the world. With this, so far, I have been extremely fortunate and have worked with some great people and companies. Not at any point have I had to make the decision as to whether or not a company interested in my services is a company that, morally, I want Souzou, as an extension of me, to be associated with.

Lets say, hypothetically, however, that a company like Wonga got in contact with me in their inception stage. I don’t know much about them, they are just a newly formed company with an idea who need complete branding, a big new website and some advertising done. Damn, I am pretty excited about this. For a small company this could be a big deal, a massive client, and could really put Souzou on the design agency map here.

A meeting is arranged so that I can sell myself more, and also to get to know more about the company, what it does and how we can work together.

So here I am at the initial “get to know each other” meeting, with my laptop at the ready, and the two guys who have formed the company are telling me about their vision, their idea, and how much money they are going to make by, essentially, fleecing people on low wages that cannot afford to go to a bank. How the poor and the downtrodden are their market because they are desperate and, in their words, not too bright.

I am already of the opinion that these two cheeky chappy cockney geezer wide boy twats are not really my sort of people, but I am still there, still listening, as I am a polite sort of person and I am not just going to get up and shout “well screw you” at them while indignantly storming out; laptop and copy of The Guardian safely tucked under my arm.

Then they start talking about all the work that would be involved, how much budget there would be, the exposure that would be had. My brain starts thinking, the holiday my family could have off just this one job is being pictured in my mind, and the gravitas that would come Souzou’s way is making me lean forward and listen more intently.

And that’s it really, as I am not personally taking the money from the poor, these guys are, and if I don’t do this job someone else will. I am almost convincing myself.

The job is going to get done so why shouldn’t it be done by my agency. Anyway, I shop at Primark, I buy Apple computers, and I have eaten chickens that haven’t been free range. I am already damned, so I might as well be damned with a bloody moohasive client who is willing to throw lots of money and business my way; not to mention the other businesses that will naturally follow in a clamour for my services if I did a great job… which I would, by the way…

I would like to say I wouldn’t and as I am writing this that is my position, but I cannot really say, and anyway how corrupt does a company have to be before you refuse their work (FIFA), or does it matter more about the size of it… Also, isn’t any large company going to have a few things or people associated with it that we might not agree with?

Oh and if you want to know the agency that designed the Wonga logo, and does their advertising, is Albion. One of those trendy agencies in Shoreditch, probably with designers with hipster beards that drink Brewdog beer.

Not that I am judging of course…